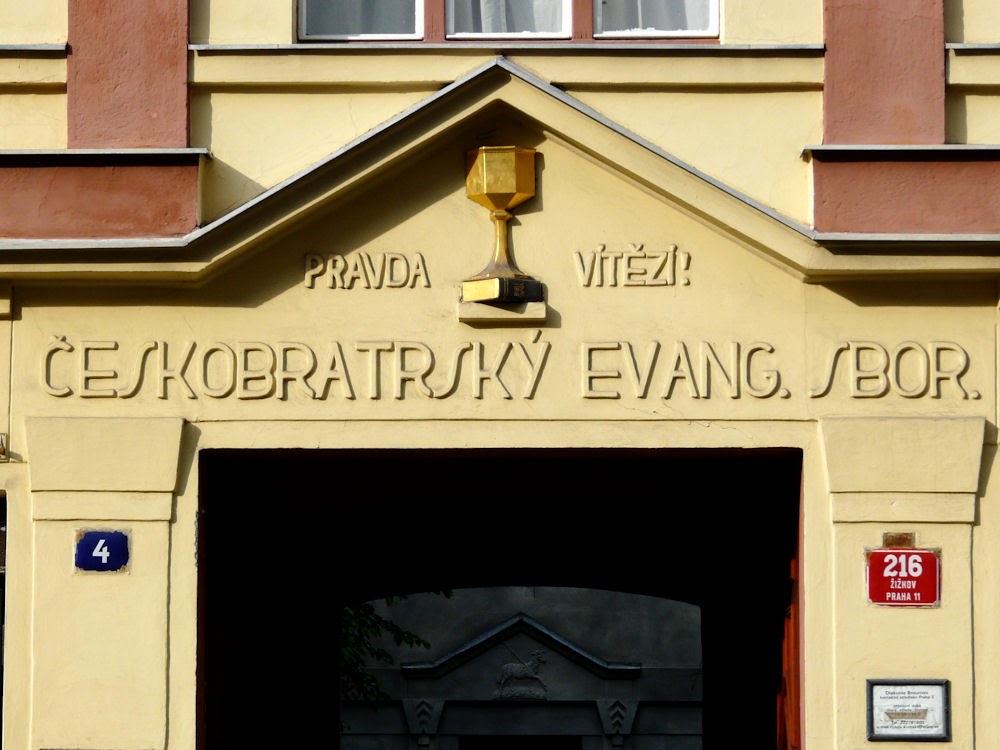 Six hundred years ago, in 1414, the practice of administering communion ‘in both kinds’ (i.e. with consecrated bread and wine for all participants, not just the clergy) was restored in Prague. The execution of the protestant leader Jan Hus the following year could do nothing to stop the fact that the reformation had finally reached Bohemia. The Hussites’ symbol of a golden chalice remained a powerful reminder of this crucial change in ecclesiastical tradition in all churches built subsequently.

In 1914, in the suburb of Žižkov, a disused sand-pit was bought and filled in to form the basis of a new church to commemorate the 500th anniversary of the death of Hus. Designed by the cubist architect Emil Králíček, the chapel is built within a residential courtyard, and defined by its strong geometrical facade. The inscription reads “Betlémská kaple. K 500. leté památce mučednické smrti mistra Jana Husi” (“Bethlehem Chapel. In memory of the 500th anniversary of the martyrdom of Master Jan Hus”). The bust of Jan Hus appears to the left of the inscription; and to its right, that of John Calvin.

In 1918, the year of the foundation of Czechoslovakia, the Lutheran and Reformed churches in Bohemia united to form the Evangelical Church of Czech Brethren (Českobratrská církev evangelická), who now have charge of the chapel. Above the street entrance appears the famous Hussite slogan (and incidentally, the motto of today’s Czech Republic) ‘Pravda vítězí!’ – ‘The truth will prevail’.