Humprecht Jan Černín (Czernin, in the usual German spelling) came from one of Bohemia’s wealthiest families, their fortunes enriched still further by the Catholic victory in the Thirty Years’ War. His great-uncle had served at the court of Rudolf II; like him, Humprecht also won prestigious positions in the service of the Habsburgs. A knight of the Order of the Golden Fleece, Czernin served as chamberlain to the future emperor Leopold I, and from 1660 to 1663 was imperial envoy to Venice, where he amassed an extensive art collection and met Gianlorenzo Bernini.

In the late 1660s, Černín purchased from the Lobkowicz family a substantial plot of land overlooking Prague Castle. On it he intended to build a grand residence in the style of Bernini’s Chigi-Odescalchi Palace in Rome. Unable to obtain Bernini’s services (though in all likelihood working to his plans) he turned instead to Francesco Caratti, one of dozens of Italian architects to travel from the Como region to complete commissions in Prague.

Werner’s 1740 view of the south-facing facade prior to the addition of Anselmo Lurago’s triple portal. Note the still extant St Matthew’s chapel to the left by František Maxmilián Kaňka. closed in 1784 as part of Emperor Joseph II’s reforms and later demolished.

Caratti had already successfully completed a neo-classical palace in the mannerist style in Malá Strana for the Michna family, so was well-known in the city. But the commission from count Czernin was on an altogether more colossal scale. At 140 metres in length, and with 29 bays articulated at regular intervals by thirty massy Corinthian half-columns, this was to be a power statement par excellence, surpassing in grandeur even the palace of Albrecht von Wallenstein himself.

The facade as we see it today was redeveloped many times in subsequent centuries, and during the period of the First Czechoslovak Republic was entirely reworked by the modernist architect Pavel Janák. His approach kept the powerful rustication of the lower floors, while raising the apparent height of the first-floor fenestration. The result, pleasing to those of a more geometrical persuasion, gives the entire frontage a somewhat forbidding aspect, softened only by Anselmo Lurago’s 1740 porches and linking balcony (below).

The monumental severity of the building suits its current function well: since the 1930s the palace has housed the Ministry of Foreign Affairs, and in March 1948 was the site of the unexpected death of the then Foreign Minister Jan Masaryk. 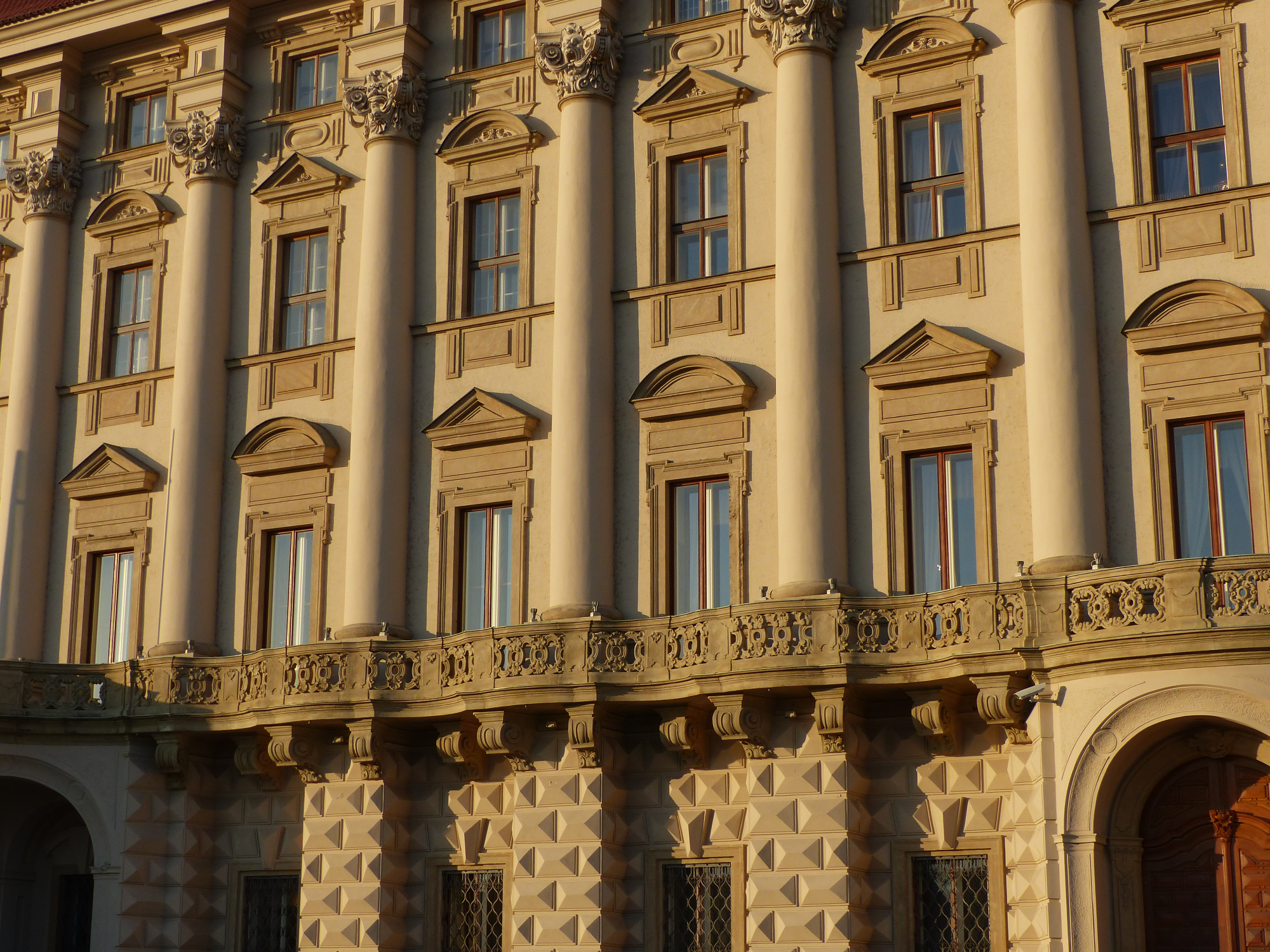 Caratti’s eastern facade, with its splendid dual sala terrena, looks out over a formal garden. Remodelled in the 1720s by the famous baroque architect František Maxmilián Kaňka (who also worked on the palace’s interiors and grand staircase)  the garden was restored in the 1930s, along with a dainty summer-house dating from 1740.