In the latter half of the nineteenth century, Czech politics was dominated by one question: how to gain greater autonomy from the Austrian empire (or indeed how to break with Austria entirely). The argument was supported by a cultural revolution – the Czech National Revival. Such was the influence of this tidal wave of patriotism that by the time of the great industrial exhibition held at Výstaviště in 1891, the influence of Austrian culture in Prague was already substantially reduced, replaced everywhere by a celebration of all things Czech.

Highly-decorated public buildings – including a new National Theatre and National Museum, galleries, concert halls, and a riot of private housing – all proclaimed the pride of the Czech people. Their facades glittered with imagery celebrating the identity and history of Bohemia, triangulated by the key figures of Princess Libuše, Saint Wenceslas, and Emperor Charles IV. And this surge of national pride was nowhere better illustrated than in the banks of Na Příkopě, Prague’s version of Wall Street. 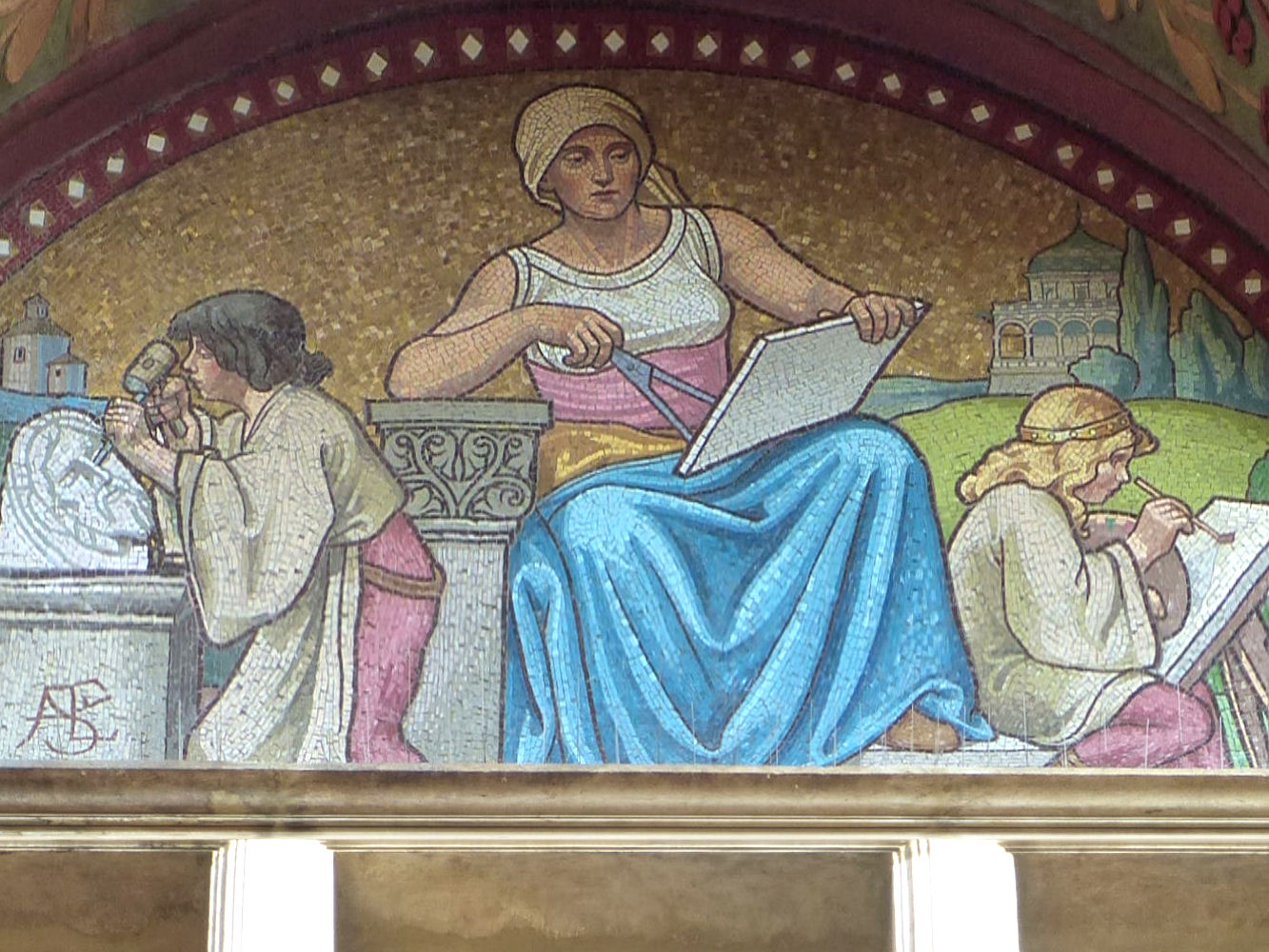 Allegory of arts and architecture, with the Royal Summer Palace in the background and the monogram of Mikoláš Aleš on the left

Three lunettes showing (left to right) the meeting of the Vltava river and the city of Prague; an allegory of animal husbandry; and the minting of silver coins

Of the dozen or so financial institutions that line this historic boulevard, two deserve particular attention. They are both the work of the architect Osvald Polívka, although separated by twenty years; and they were both originally branches of the Zemská (or Provincial) Bank. The neo-renaissance Number 20 (above) was constructed between 1894 and 1896. In the lunettes above the second-floor windows appears a series of mosaics on the theme ‘Sources of Economic Welfare’, designed by Mikoláš Aleš.

The building at Number 18 (below), connected by a ‘bridge of sighs’ to its older sibling across the street, was built between 1909 and 1912.  The decorative sculpture on the facade is by Celda Klouček and the figures on the roof by Ladislav Šaloun, who also contributed to the earlier building. The mosaics, showing allegorical representations of Czech life, are by the artist Jan Preisler.

Mosaics after allegorical designs by Jan Preisler, depicting the fruits of labour, and the aspiration of industry. The father’s gesture of an outstretched arm pointing to a brighter future mirrors that of Libuše, mythical foundress of the city of Prague.