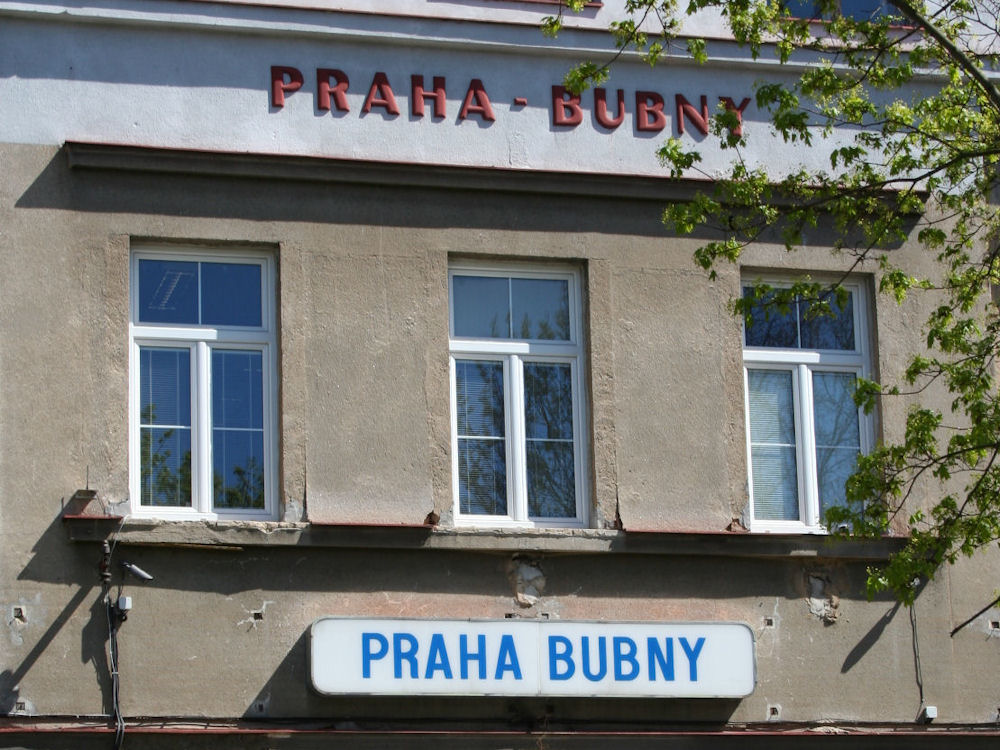 The first trains passed through this northern suburb of Prague in 1850, but it was not until 1873 that a station was constructed to service the coal industry that had grown up in the loop of the Vltava. Originally part of a much larger complex comprising workshops and a locomotive maintenance depot, Bubny station has now been relegated to a minor local stop en route to the west and north of the city.

During the years of the Second World War, however, Bubny represented the last view of home for the tens of thousands of victims of Nazi oppression who were deported to the concentration camp at Terezin (Theresienstadt), and thence in many cases to Auschwitz.

As this nearby plaque reminds us, between November 1941 and the end of the war, over 45,000 Czech Jews were taken from the mustering ground at the Veletržní Palace (today Prague’s main modern art gallery), and made to walk the short distance to the trains waiting for them at Bubny.

Urban development plans for the area drawn up in the mid-2000s could have resulted in the demolition of the station. But in late 2012, a group led by documentary film maker Pavel Štingl proposed a scheme — currently being realized — to transform the building into a centre for contemporary history called the Memorial of Silence.

The first element of the project has already been put in place: a 60-foot section of railway track reaching to the skies by sculptor Aleš Veselý recalls the biblical story in which Jacob dreams of a ladder reaching to Heaven with ‘angels of God ascending and descending on it’. Opened on 9 March 2015, the 71st anniversary of the last executions of Czech Jews at Auschwitz, it is also a potent symbol of the tragedy of the death camps.

In English, the sculpture is called ‘The Gate of Infinity’. Its Czech name, ‘Brána nenávratna’, is much more telling: it means ‘The Gate of No Return’.