Completed in 1875, the Provincial Maternity Hospital in Prague represented the state of the art in nineteenth-century obstetrics. At that time, many young mothers died in childbirth; so in 1867, on the orders of Count Franz Thun-Hohenstein, construction began on the new hospital and dormitory complex. The choice of site was no doubt influenced by its proximity to the nearby church of St Apollinaris, in whose grounds there had been a hospital for poor and destitute women since 1789. 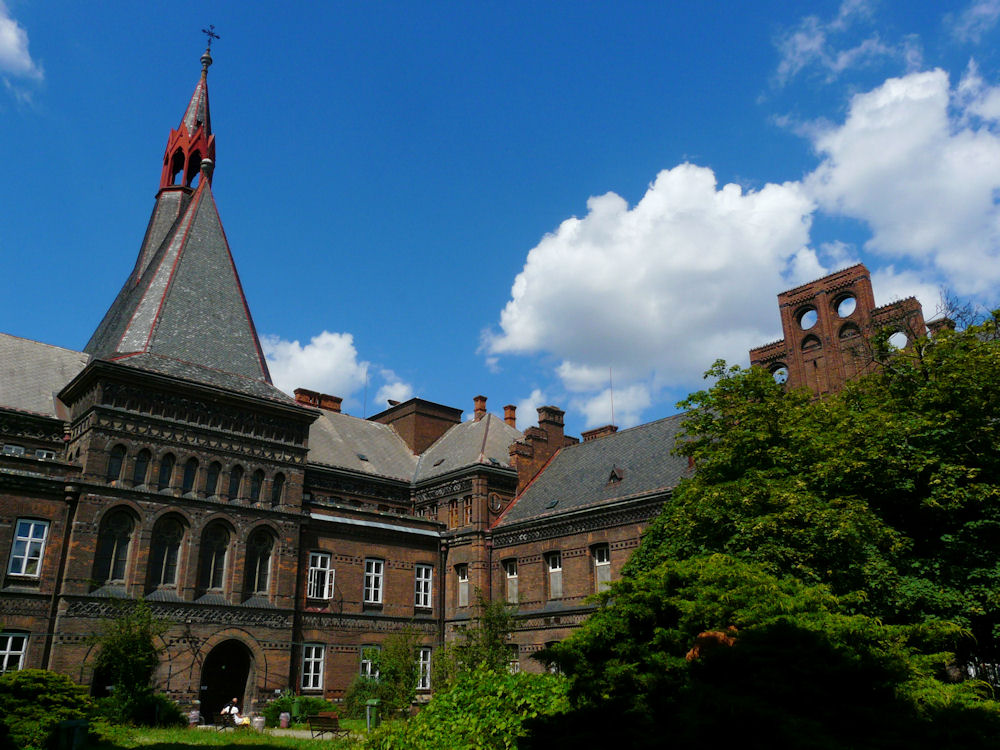 The architect was Josef Hlávka, who had already made his name with his designs for the quite extraordinary Residence of Bukovinian and Dalmatian Metropolitans in Chernivtsi, Ukraine – nowadays a listed UNESCO building. Hlávka worked principally in a combination of the byzantine and neo-gothic styles. In Prague, he employed the same distinctive stepped gables as in the Ukrainian seminary, and made similar use of red brick for the exterior facades. The building’s six accommodation wings are set around a central garden court, while the steeply-gabled gothic tower surmounts an exquisite oriel-windowed chapel.

Unusually for Prague architecture, the brickwork remained unplastered at the insistence of the hospital committee, whose belief was that such a surface would lessen the transmission of infection. The consequent darkening of the original red brick today lends the facade a somewhat forbidding appearance. Inside, however, the hospital remains one of the most impressive and up-to-date facilities of its kind. With 4500 deliveries annually, it was one of the first in Europe to receive accredited status from the professional body EBCOG (European Board and College of Obstetrics and Gynaecology).

2015 saw the 140th anniversary of the completion of the building (now the National Maternity Hospital). On 28 April, a commemorative plaque to the architect — also noting his philanthropic efforts — was unveiled by the family foundation which Hlávka had the foresight to establish in 1904.