The high ground to the west of Prague called Bílá Hora was the scene of one of the earliest engagements of the Thirty Years’ War. The short but significant ‘Battle of the White Mountain’ of 1620 ended in a victory for the Catholic League, who forced the already demoralized Bohemian Estates to retreat half a mile to the former hunting lodge known as the Star House.

Initially, a small memorial chapel was erected near the battlefield, but it was badly damaged during the invasion of the Protestant Swedes in 1634, and by the end of the reign of Leopold I was already dilapidated.

In 1704 the chapel was rebuilt by the Bavarian mason Michael Hagen. Later, Hagen’s son-in-law Heinrich Klinegleitner (aided by the local Prague painter and architect Christian Luna) conceived a much grander plan involving further side chapels linked with a series of cloisters and interconnecting wings. 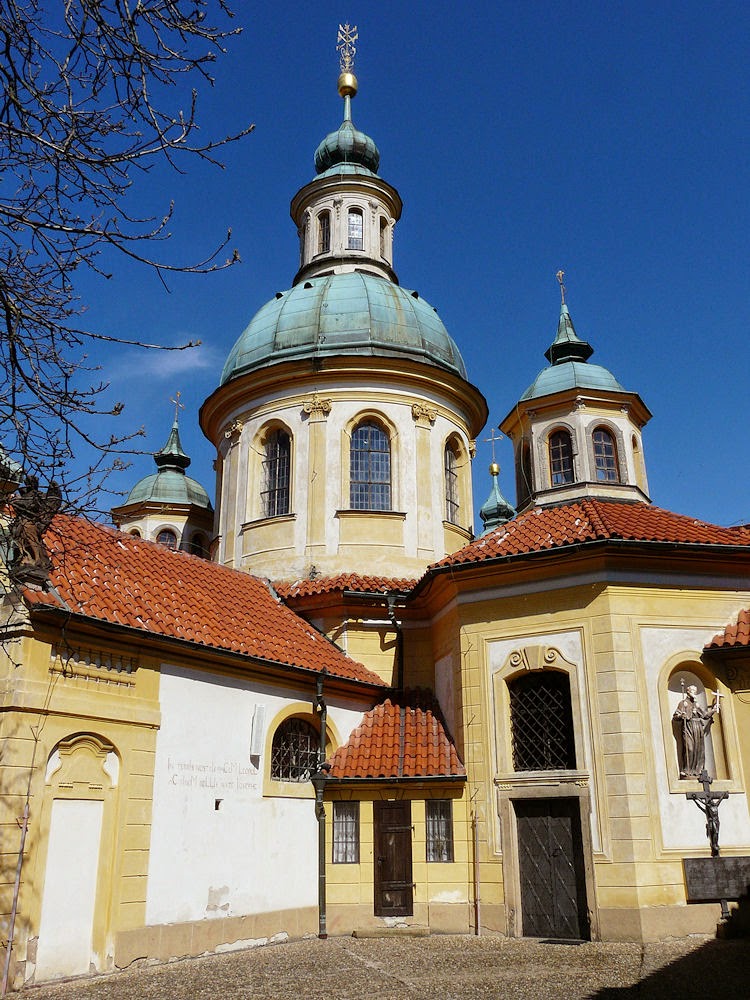 The resulting church (one of two in Prague dedicated to Our Lady of Victory) was developed between 1704 and 1714. A second phase of construction from 1715 to 1729 saw the original dome replaced by a taller structure, and the cloisters and corner chapels completed: both undertakings were almost certainly directed by the baroque master Jan Blažej Santini. Finally, an entrance portal on the theme of the Annunciation was added to mark the end of construction in 1730. In design and composition it strongly reflects the influence of the prolific Kilián Ignác Dientzenhofer.

In 1785, the pilgrimage site was abolished as part of Joseph II’s political balancing act the Edict of Tolerance; it was restored again only at the start of the 19th century. The mid-twentieth century led to several changes of use: the complex was used by the Luftwaffe to house an anti-aircraft battery; later the communists used the neighbouring farm-buildings – though not the church – as a base for wire-tapping. Since 1989 the church has been under the care of the local Benedictine order, with a community of nuns living there since 2007.