Postal services in Bohemia started in 1526, when mounted couriers made the first deliveries between Prague and Vienna, the twin seats of the Habsburgs. But it was not until the reign of Maria Theresa in the 18th century that permanent post offices were established.

The plot of land east of Wenceslas Square where Prague’s main post office stands has a fascinating history. In the 14th century it was granted by Charles IV to the pharmacist Angelus of Florence for use as a botanical garden to supply herbs for his pharmacy. Known as Hortus Angelicus, it was reputed to be the largest such garden in mediaeval Europe.

In 1743, Kilián Dientzenhofer‘s convent of the Celestine order was built here. Following its abolition in 1782 under Joseph II’s Edict of Tolerance, the former cloister became a tobacco factory and stamp office, and in 1871 it was demolished to make way for the Post Office, a three-storied neo-renaissance palace which took nearly thirty years to complete.

Designed by Antonín Brandner and constructed by the firm of Jan Bělský, the building is memorable for its glazed courtyard housing the postal counters. All four walls are covered in an elaborate mural by the art nouveau artist and illustrator Karel Vítězslav Mašek, completed between 1898 and 1901: 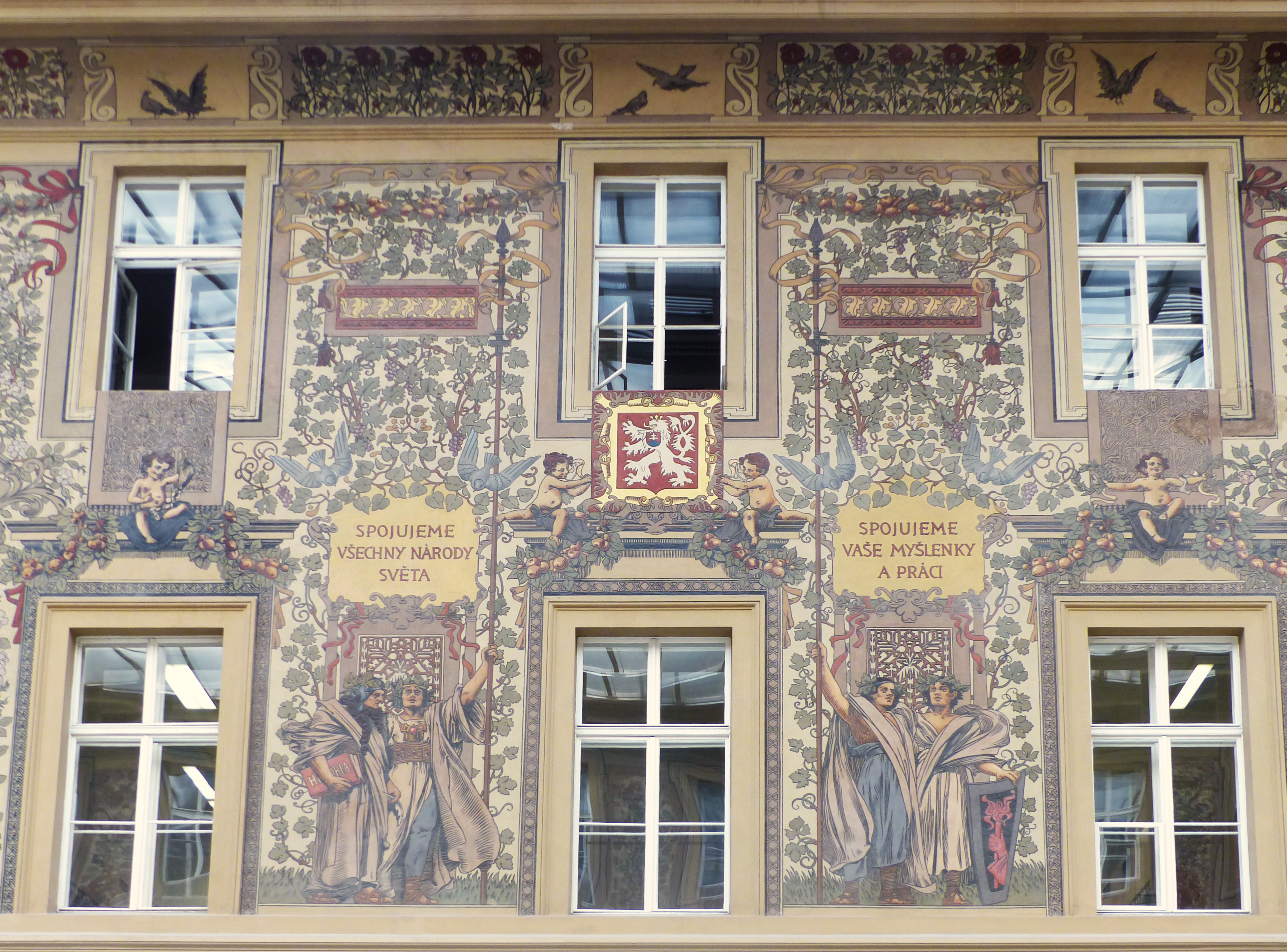 Mašek’s paintings depict the continuous history of the postal service in the form of figures dressed in historical costume. Alternating with these vignettes are emblems of Czech nationhood and coats of arms of the principal towns served by the postal system.  Directly facing the entrance, allegorical figures of History and Enlightenment appear, surmounted by banners reading ‘Spojujeme všechny národy světa’ (‘We connect all the nations of the world’) and ‘Spojujeme vaše myšlenky a práci’ (‘We connect your thoughts and deeds’). 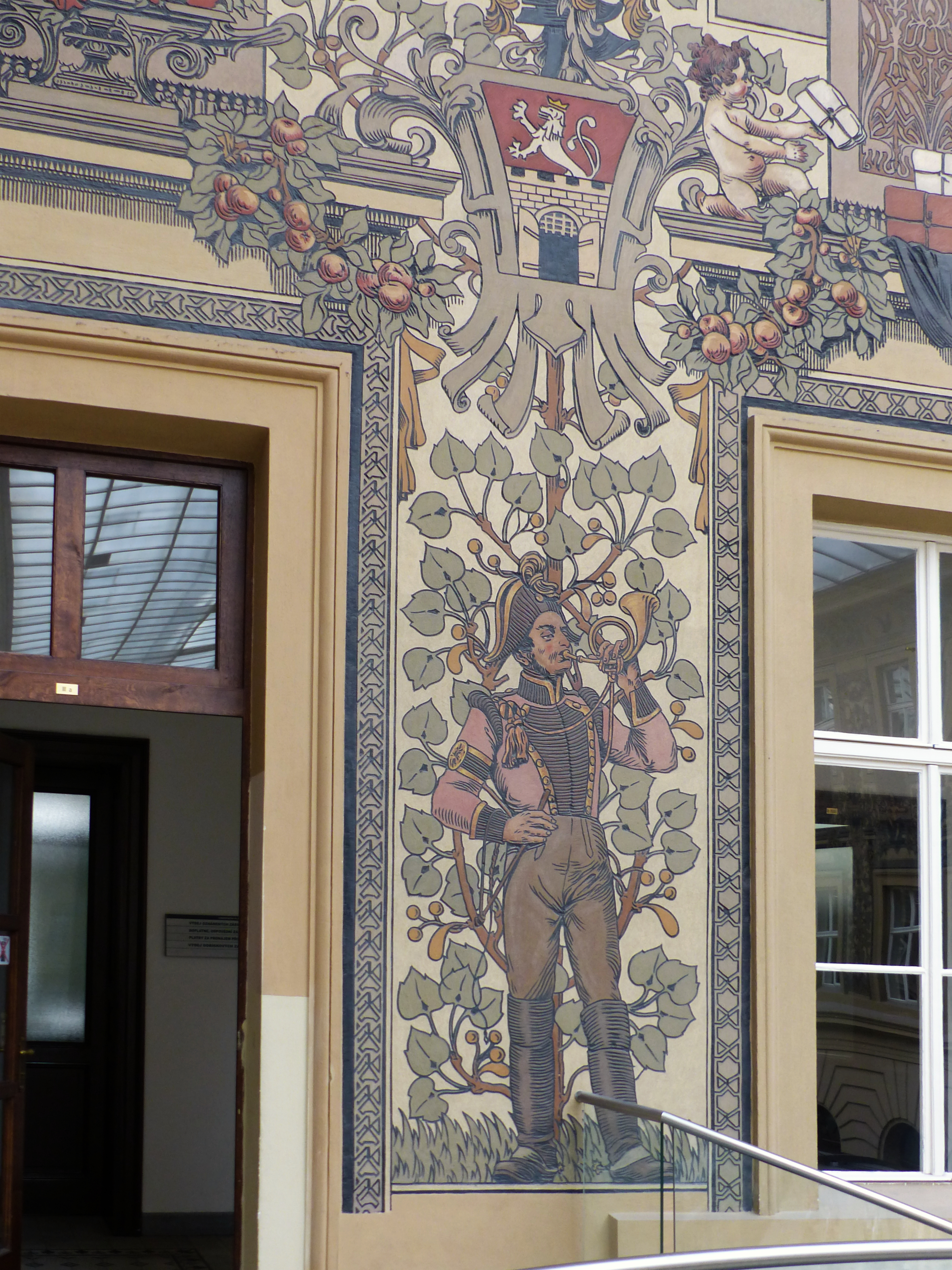 Postilion and horn, with the coat of arms of Litoměřice; mural by Karel Vítězslav Mašek

The ornate patterns of leaves and flowers that swirl around the figures are typical of art nouveau, and include the linden, the Czech national emblem. But could it also be that Mašek had in mind the ‘Hortus Angelicus’ that occupied this space five hundred years previously? 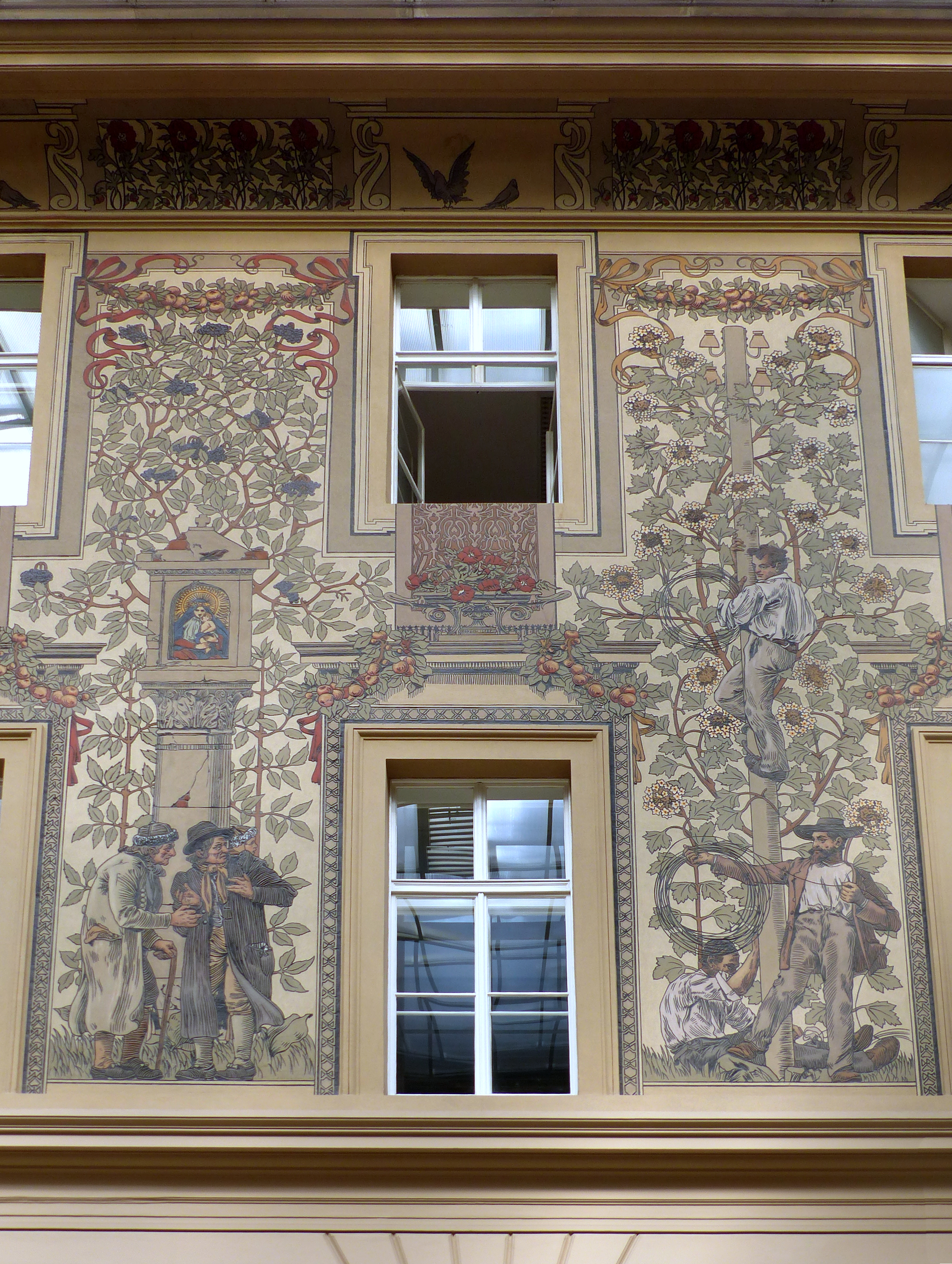 Amid hops and vines, Post Office workers lay telegraph lines —  to the bemusement of the older generation; mural by Karel Vítězslav Mašek