The baroque statues for which Charles Bridge is rightly famous are not arranged according to any predetermined plan. They were erected individually over many decades, part of the programme of recatholicization after the Thirty Years’ War. The choice of subject is therefore somewhat eclectic: well-known figures such as John the Baptist and Saint Augustine rub shoulders with names more familiar to a local audience, such as Saint Ludmila and Saint Wenceslas.  But of all the statues who cast their gaze over the milling crowds of tourists and daytrippers, none is more celebrated by Czechs than that of Jan Nepomuk.

Jan of Pomuk was vicar-general of Saint Giles’s church in Prague’s Old Town, a position awarded to him in 1393 by Jan of Jenštejn, archbishop of Prague. It was not a position he would hold for long. A dispute arose concerning King Wenceslas IV’s preferred candidate to take over the Benedictine abbey of Kladruby. In rejecting Wenceslas’s politically-motivated choice of abbot, Jan of Jenštejn effectively sealed his own resignation. But the unfortunate Jan Nepomuk, who supported the archbishop, was tortured, killed, and thrown off the bridge on the orders of the king. 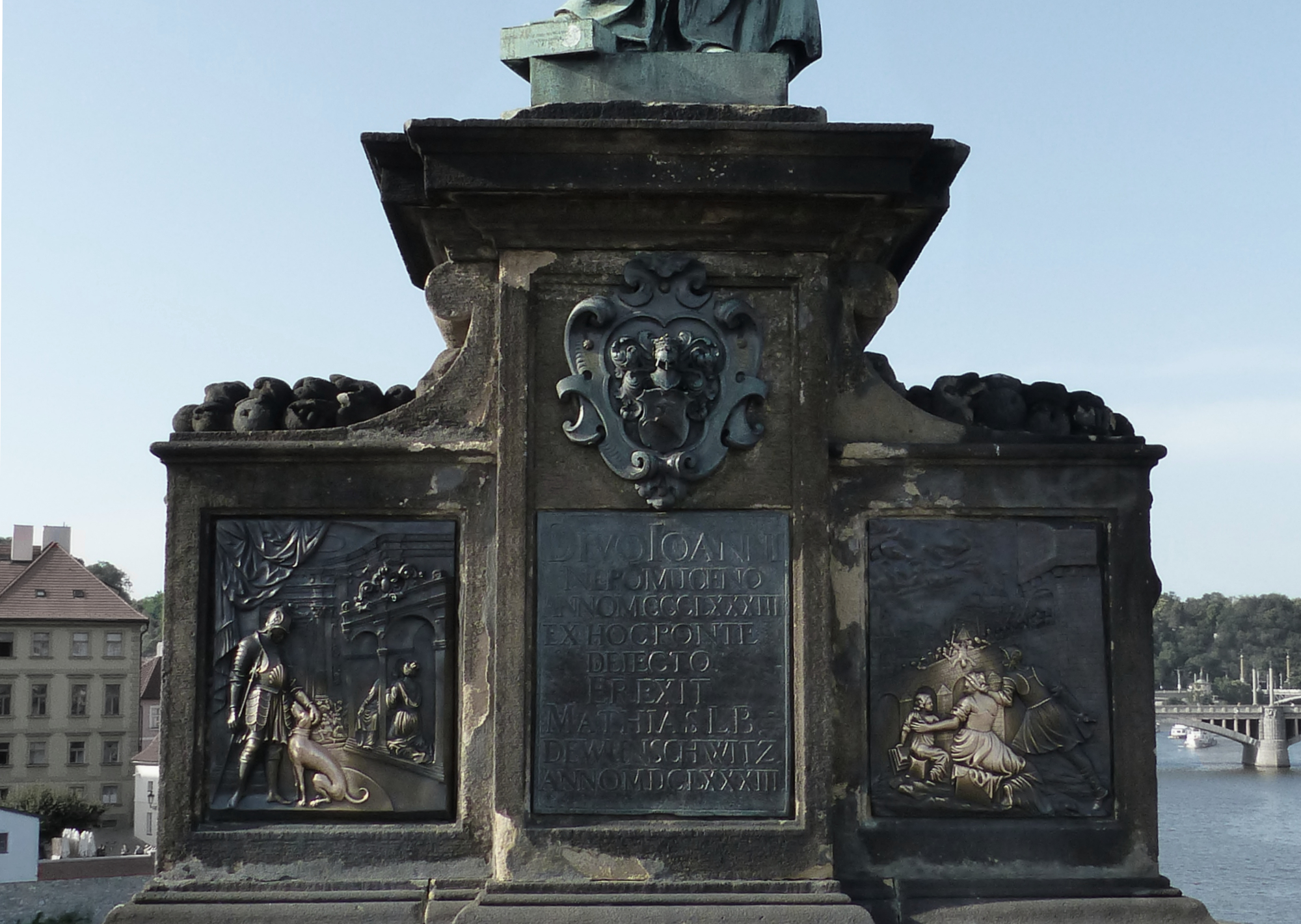 A colourful piece of Catholic revisionism tells a different tale, in which the saintly Jan was hurled from the parapet while still alive, having refused to repeat to the king what the queen had revealed in the privacy of the confessional. In this version of the story, at the very moment when Nepomuk’s body slipped below the icy waters of the Vltava, five stars (one for each of the wounds of Christ) were seen to hover over his head.

Three hundred years later, in 1683, this statue was erected near the spot where the infamous ‘depontification’ occurred. In the intervening years, Nepomuk’s act of resistance — or martyrdom, depending on your viewpoint — had already turned him into a popular folk-hero: copies of the statue are consequently to be found in nearly every Czech village.  Yet it was not until 1729 that he was elevated to the sainthood, almost certainly to provide a counterbalance to the cult of the legendary protestant preacher Jan Hus.

Based on a design by Matthias Rauchmüller, the original statue was made by Jan Brokoff, father of a famous dynasty of Prague sculptors, and cast in bronze by Wolf Herold of Nuremberg.  One of Brokoff’s two sons, Ferdinand, went on to create seven further statues on the Charles Bridge (one of them in collaboration with his brother Michael).  Jan Brokoff himself created four statues for the bridge, of which his Nepomuk is the sole survivor.